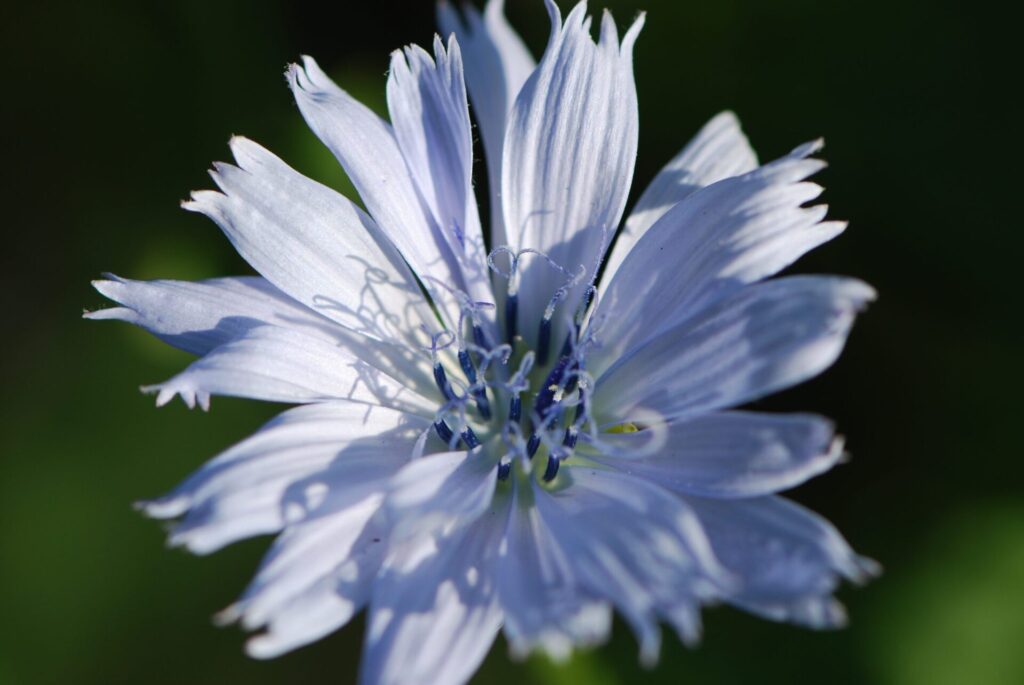 Chicory grows wild in plain as well as in mountain. We can find some alongside rocky meadows and wastelands of most of Europe, West Asia and North Africa. It is a perennial plant with blue flowers whose peculiarity is to only blossom early in the morning or when the weather is cloudy.

Later in history, the Greeks and the Romans used the root for its appetitive * and digestive properties. Dioscorides, a Greek doctor of the first century, writes in his book De Materia Medica, “Chicory is used to treat wounds and to regulate digestive disorders thanks to its anti-inflammatory properties.” Horace, a Roman poet, also refers to the consumption of chicory leaves in his Odes: “Olives, chicory and blue mallow are enough for me to live on”.

Chicory is cultivated in Europe as a medicinal plant since the Middle Ages and Benedictine monks have improved varieties of chicory for food purposes.

In 1763, the Dutch applied roasting to the root, which improves the taste of the infusion. This method has spread all throughout Northern Europe in England, Prussia, Belgium and France.

In France, roasted chicory experienced a real boom in 1806, during the war against England. The blockade caused a shortage of coffee and Napoleon promoted the development of chicory culture in the North to replace coffee.

In 1875, the gardener of the King of Belgium transposed the technique of “forcing **”, already known for dandelion, to reduce the bitterness. He thus obtained the first chicory, improperly called endives as this term describes another species, Cichorium endivia , of which the best known variety is the escarole.

Chicory, whether it is combined or not with coffee, is still a very popular beverage in Belgium, as well as in the North de France, to the point of being one of the symbols of this region which concentrates the essential of French production , about 80,000 tons.

Chicory experiences a new industrial outlet with its roots, being the richest vegetable source of inulin. This natural fiber is used in industrial foods as well as in food supplements because it helps reduce cholesterol and promotes a good balance of the intestinal flora.

Preheat your oven to 120 ° C (heat 3-4). In a bowl, combine the milk, sugar, egg yolks, cream and chicory. Fill ramekins to the brim and cook in the oven in a bain-marie for 1 hour. Set it out and let cool.
Before serving, sprinkle with vergeoise and burn with a hot iron or a torch.

* that improves the appetite
** In this case, forcing is a method to grow the plant without sun in order to whiten it, by placing it in a cellar for example.