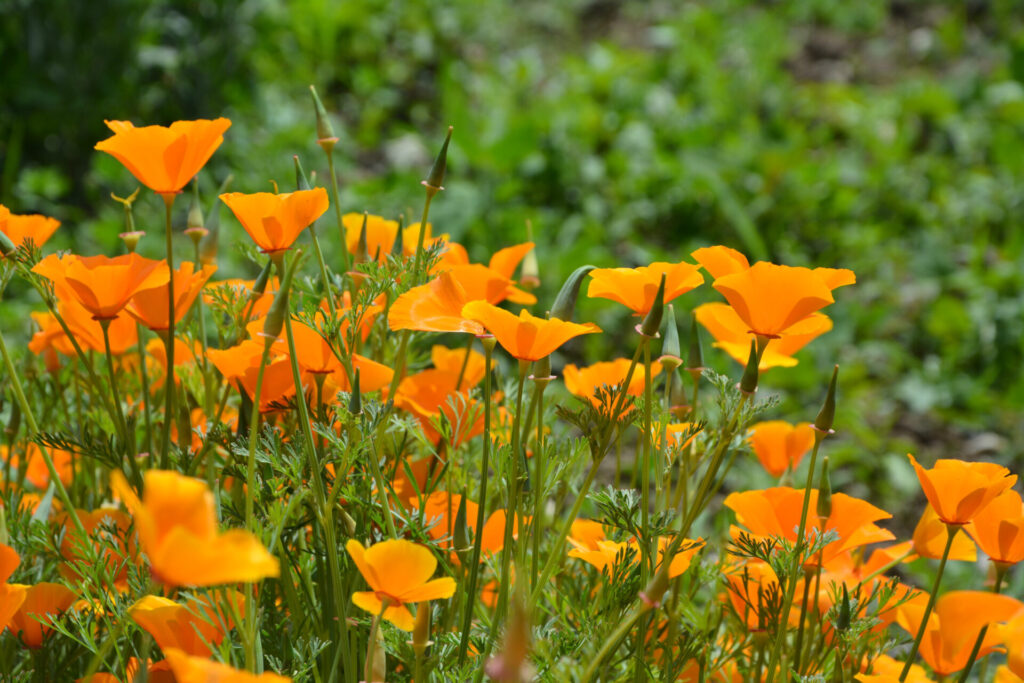 The California poppy, or Eschscholzia, is a plant originating from southwestern North America. It is on the California State emblem, where the most beautiful populations of this plant are found, such as in the Natural Parks of the Antelope Valley where the hills become literally orange at the time of flowering.

The Indians of California use this plant to relieve tooth and belly aches with the juice of the plant or with the chewed plant. Its calming virtues have long been known: infusion were made, for example, to help babies sleep. Smoking the poppy had the reputation of provoking euphoria. The Cahuilla women, an Indian tribe of Colorado, use its colored pollen as make-up.

The Europeans discovered it in 1820, during the era of great natural expeditions. It is the Franco-German poet and naturalist Adelbert von Chamisso who described it for the first time. As to honor his traveling companion, Dr. Johann Friedrich von Eschscholt, he named the plant Eschscholzia.

Imported to Europe as an ornament, its medicinal properties will be studied much later.

Parent of the opium poppy, Papaver somniferumEschscholzia shares with this plant the calming, sedative and analgesic properties. The California poppy has no opiate derivatives, such as morphine, and does not cause addiction.

Unlike opium poppy, its use at moderate doses is without particular risk and without significant side effect.
The California poppy makes it easier to fall asleep, decreases nighttime awakening, calms nervousness and associated disorders (headaches or digestive pain for example).
It is not recommended during pregnancy and lactation as it has been used to stop lactation.

The California poppy is today a frequent guest of our gardens, where it brings color and cheerfulness. It is easy to cultivate, not very demanding in water, to be sowed preferably in a warm and dry place. By suppressing faded flowers, the period of flowering can be extended throughout the summer.
This flower is very sensitive to frost but naturally spreads abundantly under the right conditions.

For herbalist use, only the varieties of orange color must be harvested.
The South of France is the main production area of ​​the plant for dietary supplements and herbal medicines.