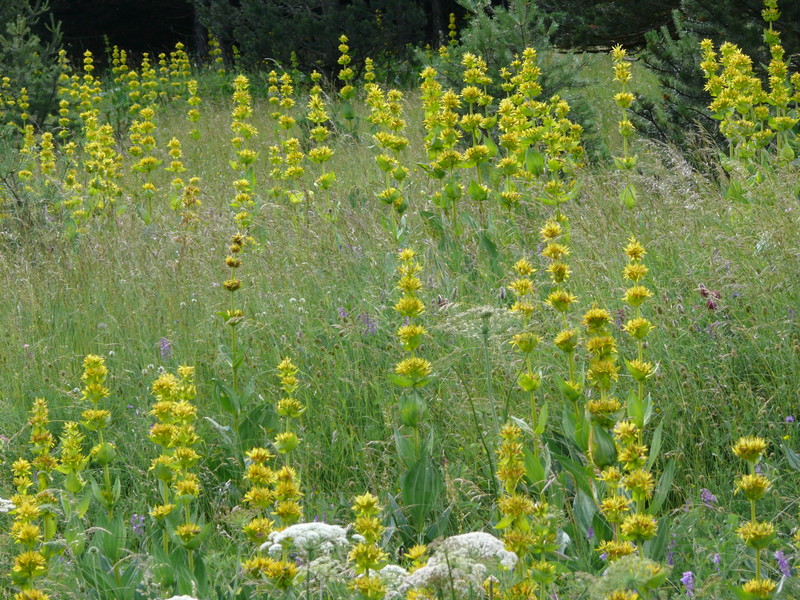 Many plants are harvested during spring and summer, when the leaves are ripe and the flowers bloom; but it is during fall that roots are gathered, when they are filled with reserves accumulated during summertime. It is the case of the great gentian, but also of burdock, angelica, etc. Great gentian a typical mountainous plant and it is observed from the Pyrenees to the Jura region, present in the French Central Massif as well. It is recognizable by its large size, up to 1m50 and its large floral stems which bear many starry yellow flowers.

The great gentian is a perennial plant that can live 50 years and produce roots of several kilos.

Gentian cultivation is difficult and most of the production comes from wild harvesting. Gentian root is very bulky and you have to use a robust tool with two teeth to dig it out called “the devil’s fork”.

This picking is regulated in order to not jeopardize the species because it grows slowly and can take up to 10 years before flowering. Harvesting begins after ripening of the seeds, from September onwards, which allows the plant to regenerate.

The plant can easily be confused with Veratre, Veratrum album, a plant that is rather similar but very toxic. How can you differentiate them? Great gentian has opposite leaves in pairs and the veratre has alternate leaves. Other criteria allow us to differentiate them even once they are dried (even if the leaves have been harvested) like the color of the root and its appearance under a magnifying glass.

The harvested roots are controlled by our quality department to avoid any risk of confusion during harvesting.

Gentian root is used in herbalism but especially for liquors. It gives its bitter taste to the Suze for example, but also to many liqueurs produced especially in Auvergne: Salers, Bonal, Avèze…

It is a very bitter plant, which even contains the most bitter natural compound that is known! This bitterness stimulates digestive secretions, saliva, digestive juices, bile … which facilitates digestion, stimulates appetite and relieves bloating. Its use as a digestive is therefore justified! On the other hand the plant is contraindicated in case of gastric ulcers because it also stimulates acid secretions of the stomach.

But the great gentian has other properties: it is a general tonic, stimulating mood and immunity. It is also a febrifuge plant, which relieves fever, and it has been called “bark of the poor.” Gentian is a real solution for winter fatigue and a valuable help get through the winter season in good health!

Gentian root can be prepared in cold maceration, 10 g per liter, to take at the rate of one glass at lunch and one in the evening. The taste is very bitter but it is what gives the healing property of the plant, so no use in adding sugar or honey…

It is also possible to prepare drinks for the end of hearty meals and the difficult digestions that follow them. Here is a recipe, directly from the Oisans (Alpes).