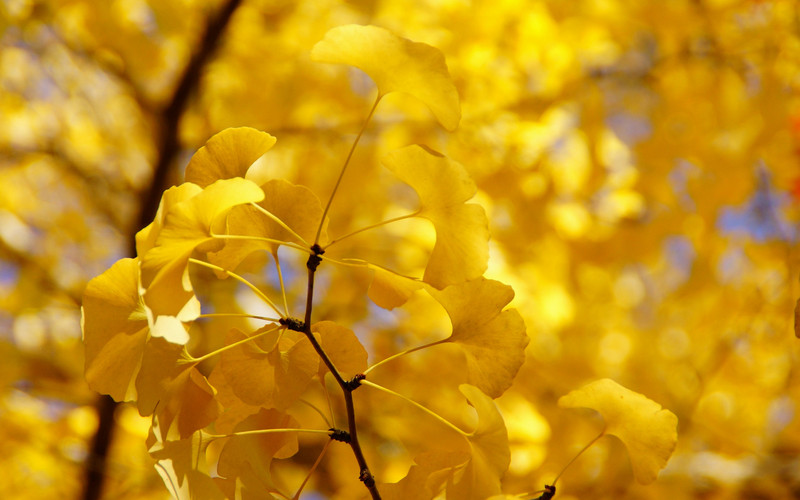 At the beginning of winter, the ginkgo tree is adorned with a beautiful yellow color which attracts our gaze to this mythical species, symbol of longevity.

It is first of all a survivor of History, the only representative of a botanical family, the ginkgoaceae, contemporary of dinosaurs, 70 million years ago.

The first mention of ginkgo is from the 17th century: European botanists described the only species they found cultivated in Japan and China, especially near the temples. It won’t be found in the wilderness before 1956, in a few unnaccessible forests of the Yang-Tse Valley.

It is also a tree that survives the passage of time and can exceed 1000 years quite easily! In the Tianmu Shan Natural Reserve (China), of the 224 ginkgos listed, nearly 10% are a few thousand years old and the oldest is 3000 years old!

The tree arrived in Europe with a few seeds brought back from Asia by a German botanist. It was first grown in Holland and then in other countries.

In France, the first ginkgo is planted in the plant garden of Montpellier in 1778, where it is still standing.
Another proof of its incredible resistance: a tree located only 1km from the impact of the Hiroshima bomb was burned completely before having re-shoots the following year! Ginkgo is frequently planted in the city because it is also very resistant to pollution.

This longevity is expressed in the medicinal properties of its leaves. Active ginkgo compounds stimulate brain microcirculation and protect the body from free radicals that accelerate cellular aging. It is also known to improve venous circulation and protects against the risk of blood clot formation, by thinning the blood.

This medicinal tree is used to reduce the symptoms of Alzheimer’s disease and treat circulatory disorders, especially related to age, as well as tinnitus and vertigo of vascular origin. WHO recognized ginkgo as an adjuvant for the treatment of dementia of vascular or degenerative origin.

In China, ginkgo is mentioned in 2600 B.C. for the nucleus of its fruit used to treat asthma and bronchitis. The fruit’s flesh, which has a nauseating odor is poisonous.

In Herbier-du-Diois, we dose the Ginkgo leaves in order to guarantee the activity and the safety of the plant: dosage of the terpene lactones and the glycosides of flavonols (active molecules) Ginkgolic acid (which presents a risk of allergy).

Caution: ginkgo may interact with anticoagulants (AVK, aspirin) and increase the risk of bleeding. Its use in these cases must be done under medical supervision.