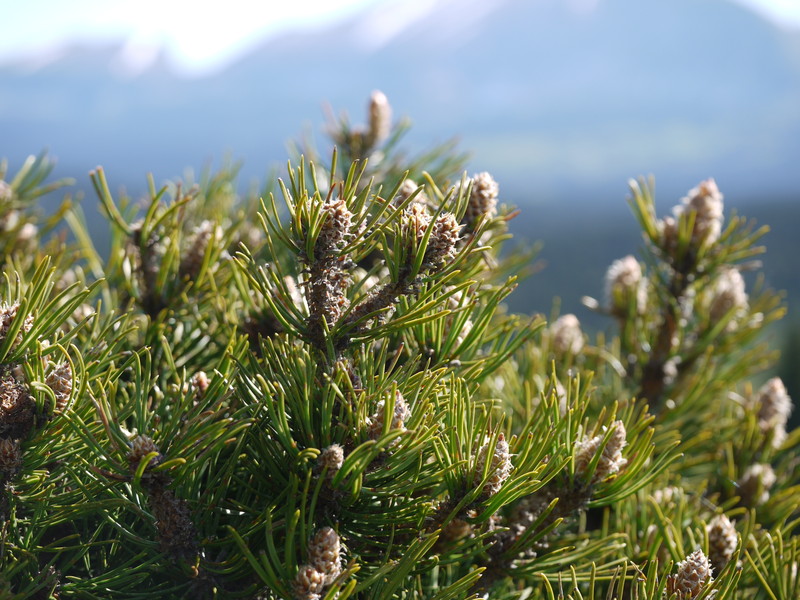 At the foot of the tree, it is not easy to know what kind of pine we are dealing with. There are many pines in their natural state: the Scots pine, the Halep pine, the maritime pine or the hooked pine, characteristic of the Hautes plateaux du Vercors nature reserve, a few kilometers as the crow flies from our building. And there are also introduced species, sometimes naturalized, like the black pine or pine of Austria, remarkable with its very straight trunk.

Let us first consider the Scots pine, Pinus sylvestris, with its orange, often tortuous trunk. To refine the identification, here are some additional clues: its needles measure a maximum of 7 cm, they are greyish green, grouped by 2, and wrapped up on themselves. The cones are small, 3 to 5 cm, with a short peduncle. It is this pine that provides the pine bud of herbalists. This one is very rich in essential oil, it is used for respiratory diseases, especially fatty coughs and bronchitis.

But it is another species that has made the fame of the town of Die: the hooked pine, sometimes called in the region pine Mugho. The story goes that four charcoal-burners harvested a piece of resinous wood on the Glandasse when “one of them was caught in the midst of the forest so painfully in the lower limbs that it was impossible for him to walk. His companions brought him into their hut […]. As the man was constantly required to pack the resinous chips into the oven, he found his rhumatism to be cured, and he was able to go up and down again without help. Two or three attempts of this nature, and the woodcutter resumed his task. This healing made a great noise, but only in the world of pitchers*; after them, it was the friends and the inhabitants of their village who knew the benefits of the new Remedy. ”

Dr. Chevandier, who was practicing in Die, studied this practice and transposed it to the town. Until then those who suffered from rheumatism had to go painfully to the mountains. In 1851, a thermo-resinous establishment was created in Die and the curists sometimes come from a distance to be treated. They will be the first tourists of the Diois!

After a golden age when several establishments were opened throughout the region, this medicine has collapsed and the last thermal-resin establishment closed its doors in the 1970s in Die.

If at this time the pines are sometimes excessively harvested, this is a new threat to these forests. In recent years, the processionary caterpillars **, which feed on pine needles, are advancing from south to north, because of the winters that are becoming milder. They can cause serious damage, especially to young trees. If you observe them do not touch them, the hairs that cover them cause irritations and allergies.

This year, they are particularly numerous in the Diois and some trees have almost no needles. What will be the long-term consequences for our forests and landscapes? How will nature adapt to this new event?
Already, in certain zones of strong infestations, black-capped chickadee specialize in the consumption of processionary caterpillars.
One simple and ecological gesture: install nest boxes!

* Pitch is a sticky product obtained from softwood or birch. It was used as fuel or waterproofing. Mixed with wax it was used to caulk the boats

** They are called so because they move in groups following one another.